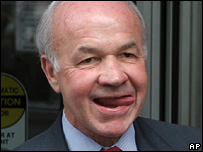 Fortune 500 company.”Â  Those hefty salaries are to compensate them for managing all the risks they take, they say. No big bucks, no big dividends.